Status of 32 kinds of salmon, steelhead, and trout 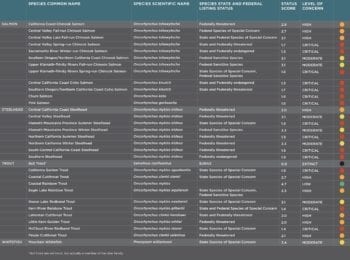 The science-based report is clear - if we don't act, we risk losing our native salmon, steelhead and trout species.

45% of species are likely to be extinct in the next 50 years if present trends continue.

The SOS II report recognizes 32 distinct salmonids in California: one for each kind of native salmon, steelhead, and trout.  Of these salmonids, 22 are endemic to California and only five are shared with neighboring states.

Each account has been distilled from comprehensive, peer-reviewed life history accounts and scoring rubrics prepared by Dr. Peter B. Moyle, Dr. Robert Lusardi, and Patrick Samuel, and will be published as Salmon, Steelhead, and Trout in California: Status of Emblematic Fishes, Second Edition. Readers interested in learning more about the diverse salmonid species in California, report methods, science underlying the scoring in the accounts, and obtaining references for further reading should review the full report.

For details of each species, click on the links below.

A glossary of terms used in the report can be found here.

Read about our approach to the analysis and scoring

The general approach taken in the analysis was to: 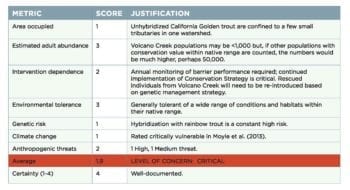 The status of each extant species was determined using seven criteria (area occupied, estimated adult abundance, environmental tolerance, genetic risk, dependence on human intervention, anthropogenic threats, and climate change. Each criteria was then scored on a scale of 1.0 to 5.0, where 1.0 was the lowest possible score for an extant species and 5.0 was the highest score. The seven criteria were equally weighted and averaged to produce an overall score for each species.

Species scoring an average of 1.0 to 2.9 were regarded as being in serious danger of extinction within the next century, while species scoring higher were regarded as reasonably secure for the immediate future. The research team recognized that information for determining the status for some species was incomplete and uneven, and developed a “reliability index” to give a sense of the certainty associated with the status scoring determination. A reliability score of “one” indicated the status rating selected had low reliability because little peer- reviewed information was available, whereas a reliability score of “four” indicated the status rating selected was highly reliable, based on numerous accounts in the published literature and agency reports.

What Fish Species are in Hot Water?

There are 4 species and 12 kinds of salmon in California

There are 8 different kinds of steelhead in California.

To graphically represent the Level of Concern for each salmonid in California, a scoring bar is used to represent categories from 0.0 to 5.0

Each species account includes a range map generated from PISCES (Figure 7), which is a software and data clearinghouse for the best- known ranges for native ﬁshes of California, housed at the University of California, Davis Center for Watershed Sciences. 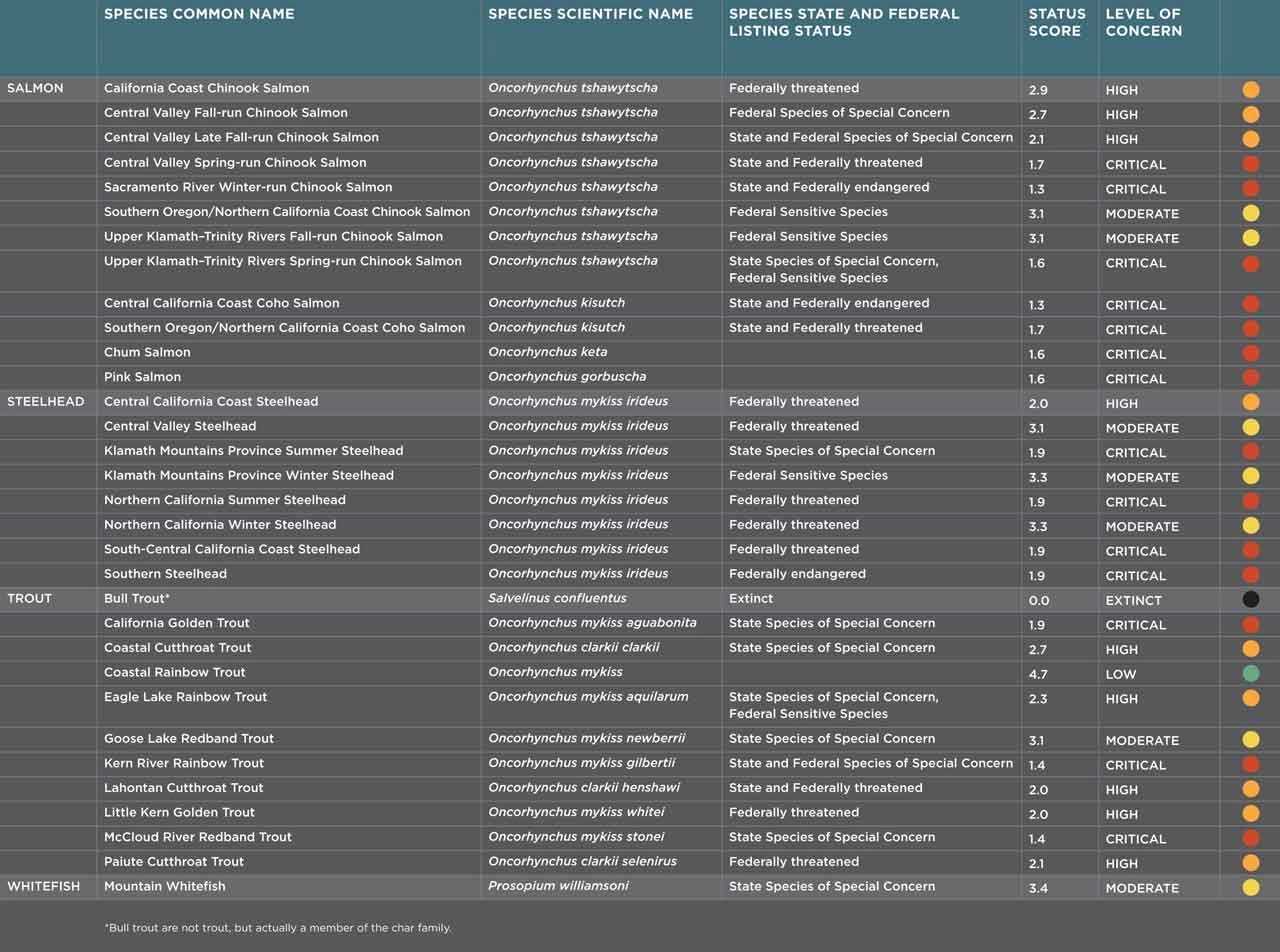 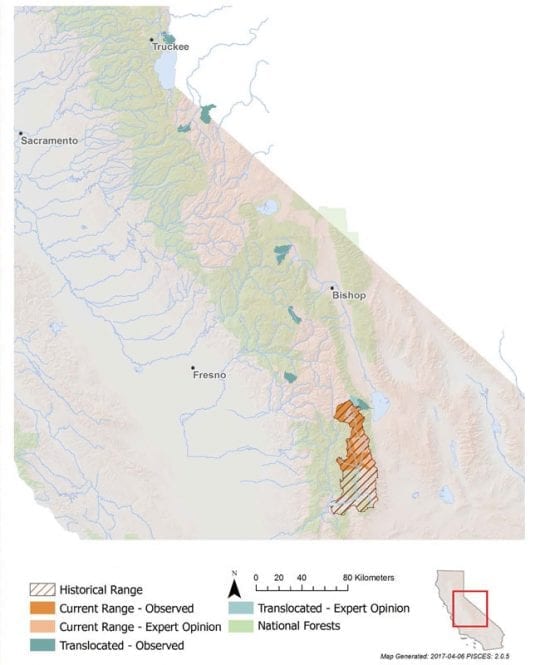 Each species account includes a range map generated from PISCES (Figure 7), which is a software and data clearinghouse for the best- known ranges for native fishes of California, housed at the University of California, Davis Center for Watershed Sciences. The data used to generate maps are compiled from multiple sources and experts and is stored and exported as range and summary maps.

The species range maps presented here show the watersheds in which each species was historically found and where they can be found today as a result of dam building, stocking, reintroduction efforts, and other factors. Some species have been translocated, or captured, transported, and released into habitats where they were not historically found to help increase their range or establish refuge populations for future reintroduction efforts.

Historical range indicates a species range before human settlement of California. Current range indicates where a fish can be found today and is shaded to differentiate direct observations, such as surveys or other confirmed sightings, and the expert opinion of professional biologists familiar with the species.

Translocated range indicates a species range that has been expanded beyond its historical range through purposeful capture, transport, and release and is shaded to differentiate between direct observations and expert opinion.